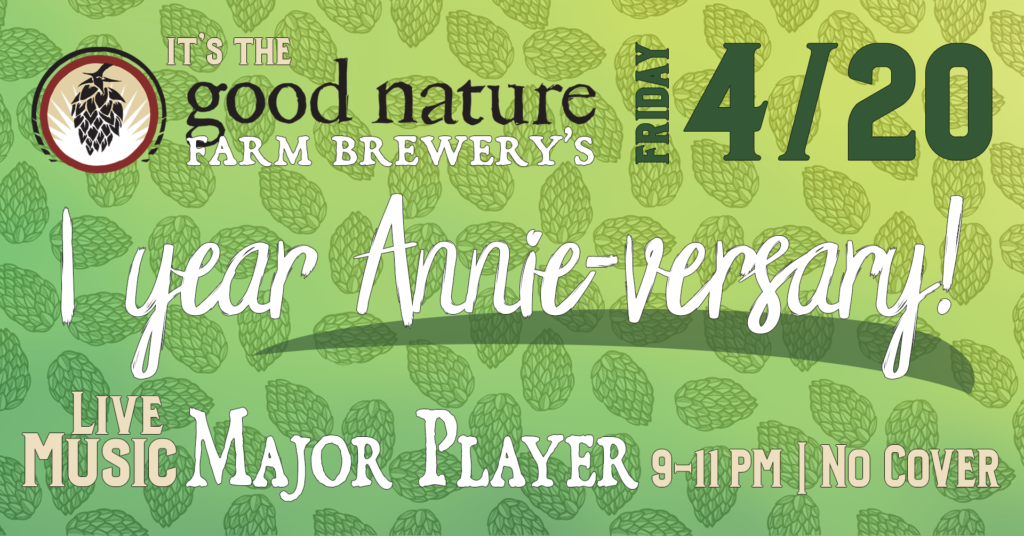 We’re celebrating the Farm Brewery’s 1 year annie-versary! What better way to celebrate than with a TRIPLE beer release and Live Music from Major Player from 9-11pm (No Cover).

1) Rotation Nation III Can Release: The third brew in our juicy Rotation Nation Series features a unique blend of Azacca and Amarillo hops, which impart distinct flavors of grapefruit, lemon, and overripe mango.
2) Jackie: Batch 1 – a Foeder-aged Golden Sour Ale- the first beer in the Kung Foeder Series – on draft and in 500ml bottles.
3) Annie’s Makeover: A special Annie variation brewed to celebrate the Farm Brewery’s first Annie-versary. Don’t worry, Annie fans, this is just a single batch, and Matt will return Annie to her normal beautiful self afterward. So what is she going to look like? That’s a secret, but we can say Matt’s changing the hop profile, along with adding some malted oats and soft white wheat from our friends over at New York Craft Malt. Look for cans tagged “makeover” on the bottom of each can.

While Good Nature Brewing has been around since 2011, we’re still growing and developing—first at the old brewery on Milford Street, then about 5 years ago we opened our Broad Street Tap Room, and now in our new(-ish) digs with increased brewing capacity, a packaging line, a farm-to-table kitchen, and Beer Garden! Come celebrate another milestone in Good Nature’s history with us.