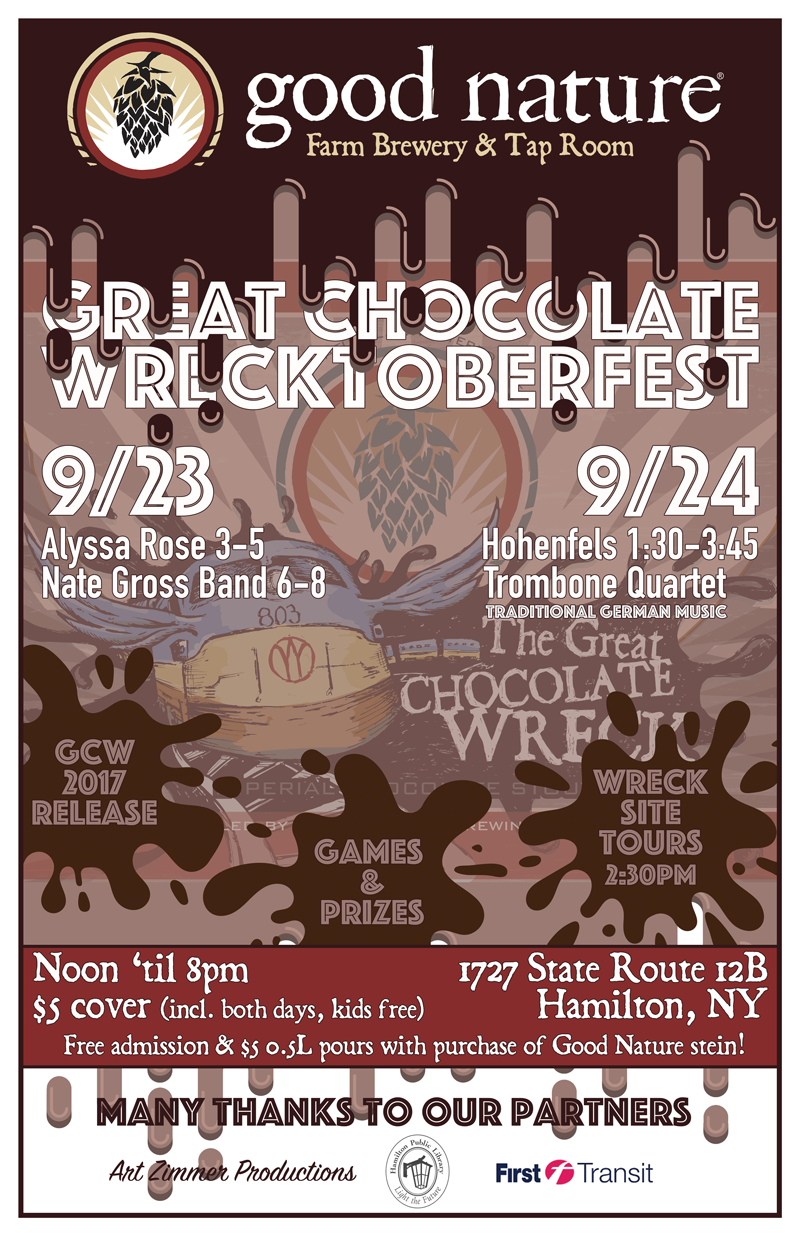 Join us for the first annual Great Chocolate Wrecktoberfest! A celebration has been held annually to commemorate the historic 1955 chocolate train wreck in Hamilton, but this will be the first one held at Good Nature’s new Farm Brewery and dubbed the “Great Chocolate Wrecktoberfest.” Keep up to date with all the announcements at our Facebook Event Page.

A $5 cover grants admission to both days of the Wrecktoberfest, and kids are free. The purchase of a Good Nature Stein includes free admission and $5 0.5L pours all weekend!

**BEER: We will release 2017’s The Great Chocolate Wreck! We’ll have the Wreck on tap and available in 375ml bottles. This will be the 6th year we release our commemorative imperial chocolate stout for the Great Hamilton Chocolate Train Wreck’s Anniversary!
BONUS BEER! The Amärzican (our take on a Märzen–a traditional Oktoberfest brew) will be on tap and also in a firkin. To kick off the whole weekend, we are honored that Hamilton’s very own Village Mayor, RuthAnn Loveless, will tap the inaugural firken which will then be served by our very own Head Brewer, Jonathan. Profits from the firkin will go to the Hamilton Public Library, who provide the Wreck photos on display every year.

**GAMES: in keeping with the Oktoberfest tradition, there will be games in the Beer Garden! And, yes, there are prizes!

**WRECK SITE TOUR & PHOTO DISPLAY: First Transit will shuttle folks to the historical wreck site for a tour with Art Zimmer and the Village Historian at 2:30 both days. The Hamilton Public Library will provide a photo display of the Wreck at the Farm Brewery. A big thank you to these partners for donating their time & services!

Many towns have had train wrecks, but Hamilton is the only village in the USA to have had a chocolate train wreck. The celebration includes “The Great Chocolate Wreck”, an Imperial Chocolate Stout brewed annually to commemorate the wreck, a display of photos taken at the wreck, free guided bus tour to the actual train wreck site, and live music. The busses provided are compliments of First Transit, the Colgate Cruisers bus company. The train wreck site is currently being partially restored into a historic park for the village by Art Zimmer. The entire event is family friendly.

More details and events for the Great Chocolate Wrecktoberfest will be available soon. Keep up to date here and on the Good Nature website,www.goodnaturebrewing.com.

The Great Chocolate Wrecktoberfest is produced and owned by Good Nature Brewing and Art Zimmer Productions.