5/9 News from the Brewhouse 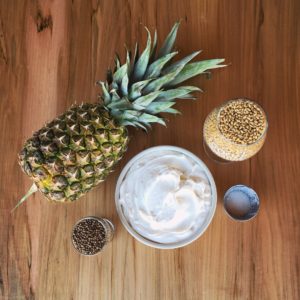 Last week, we asked for guesses on our new brew, and boy, were you folks fast! Within minutes, Good Nature’s Facebook & Instagram followers got the right answer, along with a bunch of really delicious alternatives! We’re working on a Gose (go-zuh).

There Gose the Farm was originally released in 2016, and for this year’s variation, we’re adding pineapple! Here are the key ingredients:

Keep an eye out for more details as this tasty brew winds its way through the Farm Brewery!

What were some of the alternative answers last week? Well, here’s a couple we think someone should definitely brew up:

Fresh Blight Buster is being packaged this week, and Annie, our Imperial IPA, is in the tank! This batch of Annie will be back to her normal self, but with the added bonus of an extra dry-hop! Dry-hopping is when hops are added to the beer after fermentation is done and the beer has been chilled. While hops added to the mash, early in the brewing process, contribute to the bitterness of a beer, the dry-hop largely contributes to the aroma and flavor of the finished beer.

If you’re interested in the nuts and bolts of the brewing process, we offer brewery tours every weekend!

The Canning Line in Action!