6/6 News from the Brewhouse 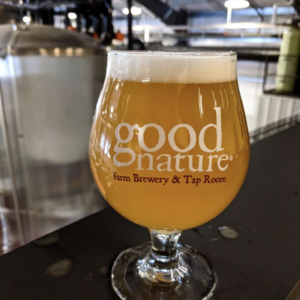 There’s plenty HOP-pening this week! (see what we did, there?) We’re sending a load of grain over to our friends at Ray Brothers BBQ to be smoked for another batch of RBQ Smokehouse Brew. Meanwhile, the GNB brewers are moving three IPAs right along!

When you visit the Farm Brewery and look through the glass into the production space, you can see how the beer moves through the facility from left to right–first the brewhouse, then the fermenters, into the brite tank, and finally off to be canned and kegged on the right side of the brewery. On a weekday, you can often see the brewers at work along some stage of the process!  If you’re interested in the nuts and bolts of the brewing process and how what we do at Good Nature makes our beer special, we offer brewery tours every weekend!

Read up on these styles below: