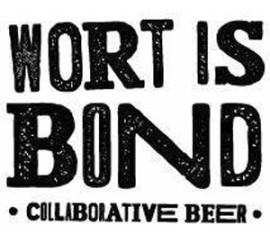 We release our first ever collaboration brew on June 26th!  The first in the series, and named after the familiar phrase, “word is bond,” Wort is Bond started with a promise to brew together one day, and this past April, brewers from Ithaca Beer and Good Nature Farm Brewery & Tap Room made good on their word.  They came together at Good Nature to create a tart yet earthy saison-style ale from pilsner, spelt, and rye malts grown in New York as well as cascade hops also grown in New York, and Polish Lublin hops. It was fermented with a farm-house ale yeast and wild brettanomyces Band L yeast strains for a crisp clean finish.  Wort is 6.5% alcohol by volume.

Wort will go on draft at select bars and restaurants around Ithaca, Hamilton, Syracuse, and Rochester areas where both breweries have distribution.

We release our Neverending SaisonNext